Here are the standings for the three top CSSHL divisions at the end of play Friday, March 17.

In the Midget Prep division, all round robin play is complete and semi finals set for Saturday afternoon.

In Pool B, OHA Red secured their #1 seeding earlier in the day with a 5-4 win over their younger OHA White classmates (shots 39-26 White).

Northern Alberta Extreme punched their card to the semi in an early morning 6-2 win over Delta Hockey Academy, to finish 2-1-0. The game was 5-0 until late in the second. Delta scored their second goal with 3:49 left, and NAX finished with an empty netter. Shots were 30-29 for NAX.

Edge will face Northern Alberta at 1:15 and OHA Red will meet BWC at 3:45 Saturday afternoon at the OHTC in Penticton.

In the Elite 15 division, teams will complete their round robin games Saturday afternoon and play their semi finals Saturday evening (8:30 and 8:45) at the OHTC.

At the moment, Northern Alberta leads Pool A, and Edge leads Pool B with four points on 2-0-0 records.

Delta and BWC are currently second seeds with three points on a win and and OTL each.

BWC will play Yale Saturday morning at the Memorial Arena and Delta will face NAX at the OHTC.

Elite 15 Round Robin Standings:
(updated at conclusion of Friday, March 17) 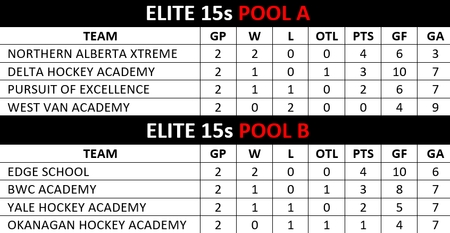 The Bantam Prep division will finish its round robin games Saturday morning, with semi-finals to be played Saturday evening.

So far, three teams have clinched.

Delta clinched top seed with a 4-2 win over OHA Edmonton Saturday morning, and will face Notre Dame in the semi at 6:00 pm (Memorial Arena). Pursuit have also clinched top seed, and are awaiting outcome of Shawnigan vs Yale game.

(updated at conclusion of Friday, March 17) 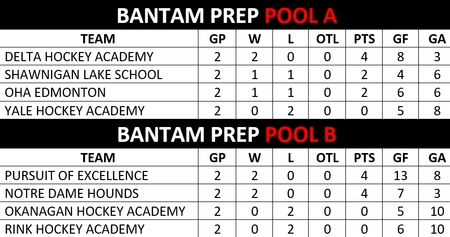 In other action, Pursuit of Excellence won the Midget Varsity Championship and Delta Green won the Bantam Varsity title.