It only took Nashville Predators rookie defenceman and Penticton Vees alum Dante Fabbro four games to pot his first NHL goal and he did it in one of the biggest games of the year for his new team.

Down 2-0 to the Chicago Blackhawks in the last game of the regular season and with the St. Louis Blues having already won earlier in the day to jump ahead of Nashville in the standings, it was a must-win game for the Preds if they were to win the division and clinch home-ice advantage in the first two rounds of the playoffs.

With Nashville pressing in Chicago’s zone midway through the second period, Fabbro pinched in from the point, took a beautiful drop pass from teammate Filip Forsberg and ripped a wrist shot top corner to beat Blackhawks goalie Cam Ward to get the Preds on the board.

Nashville would go on to score once more in the second and add three more in the third to win the game 5-2 and clinch their second straight Central Division crown. 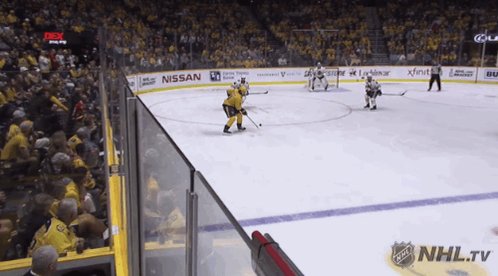 “I honestly didn’t have much going through my mind, I was just pretty amped up about it,” Fabbro told the Predators website.

“The first guy I saw when I turned around was [Ryan Johansen – a Port Moody native], so he gave me a big bear hug. It’s such a surreal feeling and I couldn’t have done it with a better group of guys.”

The 20-year-old from Coquitlam ended his night with one goal, one shot, one hit and two blocks in 13:04 of ice time.

Fabbro and the rest of his teammates will face the Dallas Stars in the first round of the Stanley Cup Playoffs starting Wednesday in Nashville.

After being drafted 17th overall by the Preds in the 2016 NHL Entry Draft, Fabbro signed his entry-level deal with Nashville at the end of March, following his junior season at Boston University.

In his three seasons with the Terriers, he totaled 80 points in 112 games and was named team captain in his final season.

Prior to joining the Vees, Fabbro played a year in the BCMML with the Vancouver NW Giants. He played minor hockey at Burnaby Winter Club, captaining the Bantam A1 team in his second year, posting 25G-53A, 78 points in 58 games.

He has also played on four Canada teams, the Canada Red U17, Canada U18, and. two Canada U20 teams.