by Isreal Fehr, The Athletic

Even​ Layton​ Ahac​ himself had​ to chuckle when​ asked​ what exactly​ got​ into​ him in​ the​ BCHL​ playoffs.

By​ his​ own​ admission, he​​ is a “two-way D that takes care of my own end.” And with 32 points in 53 regular season games, Ahac was certainly a steady offensive contributor from the blueline for the Prince George Spruce Kings.

But when looking over his team’s postseason results, it was his point production that stood out.

Ahac had 17 points in 17 playoff games, five of which came in Prince George’s four-game sweep of the Vernon Vipers in the league’s final. In fact, the Spruce Kings lost just once in the postseason, all the way back in the first round.

It has been a surreal run, one that will stand as perhaps the most dominant in recent BCHL history. Even the 2011-12 Penticton Vees team that famously produced a 42-game winning streak in the regular season lost three playoff games on their way to the championship.

“Each series a different guy came up big. Every guy has a role and every guy played that role really well. That’s what you want in a team.”

It’s easy for Prince George’s head coach Adam Maglio to get his team to follow a game plan when he can lean on a well-rounded player like Ahac who “does it all.”

And the offensive outburst? According to his coach, it was simply a matter of time for the 17-year-old from North Vancouver, whose five playoff goals bested the four he scored in the regular season.

“To be honest, it just kind of started going in the net for him … Your confidence goes up when you start producing, which he did early on in the playoffs. You could see him build his game from a confidence standpoint through each round. He seemed to get better and better every single round,” Maglio said.

“Layton’s offensive production at the start of the year might not have been where we thought it could’ve been at. But I think at the end of the day he does so many little things really well.

“He’s shut down top players on other teams in our league. He plays the power play, the penalty kill. He plays everywhere. I think that’s the prototypical D-man that teams want in today’s game.”

The sudden scoring surge wasn’t the only big leap for Ahac in recent weeks, either.

The NHL Central Scouting draft rankings released earlier in April had him as the No. 62 North America-based skater eligible for the 2019 NHL Draft, well up from No. 114 where he was placed in January’s midterm rankings.

“Throughout the year I’ve talked to teams. They all ask similar questions and you’ve gotta give them honest answers. At the start of the season I think it was in my head a little too much,” Ahac said.

“I like to see my name go up, obviously. But at the end of the day, I’m never satisfied, I’m always pushing for more. I want to win.”

The surprising playoff scoring; his team’s rollicking success; the simultaneous rise in the prospect rankings; It was a perfect storm that painted Ahac as a shooting star in the draft landscape.

In reality, it is the product of a patient two-pronged development process that has accelerated in recent weeks.

Maglio first came across Ahac when the defenceman was 15 and played for the West Vancouver Academy team. He immediately noticed his on-ice intelligence and observed how Ahac’s attention to detail was rare for his age. That would provide the foundation for his game. But there were further steps for him to take before he would be able to fully deliver on his promise.

First, he had to make the most of his size.

Ahac was tall but lanky. Now 6-foot-3, he has filled out to a point where he has started to grasp his physical potential.

“With experience and time in the gym, I’ve put on strength and learned how to use my body. I’m a big frame so that physical aspect obviously still needs improvement but it is something I have improved on,” he said.

Specifically, Ahac has been training with an eye toward the NHL Draft combine, which required extra time spent in the gym to bulk up.

The physical exertion of hockey makes it extremely challenging for players to gain weight during the season, regardless of their body types and the junior hockey schedule is demanding enough on its own. Then there’s the time Ahac, who is committed to attend Ohio State University in the fall and play for the Buckeyes program, has dedicated to his school work.

“Credit to Layton because it’s not an easy task to do it during the year, in-season. We do have a very good strength coach and we have that resource in our league to have someone to work with our guys four days a week,” Maglio said.

“Layts is on a bit of a different program because he’s got the combine (coming up). He’s been training during the playoffs for that as well. The strength and mass he’s been able to put on during the year is pretty incredible. It goes back to him really wanting it and being really focused on his goals. He’s certainly a well-prepared and focused kid and that’s pushed him along.” 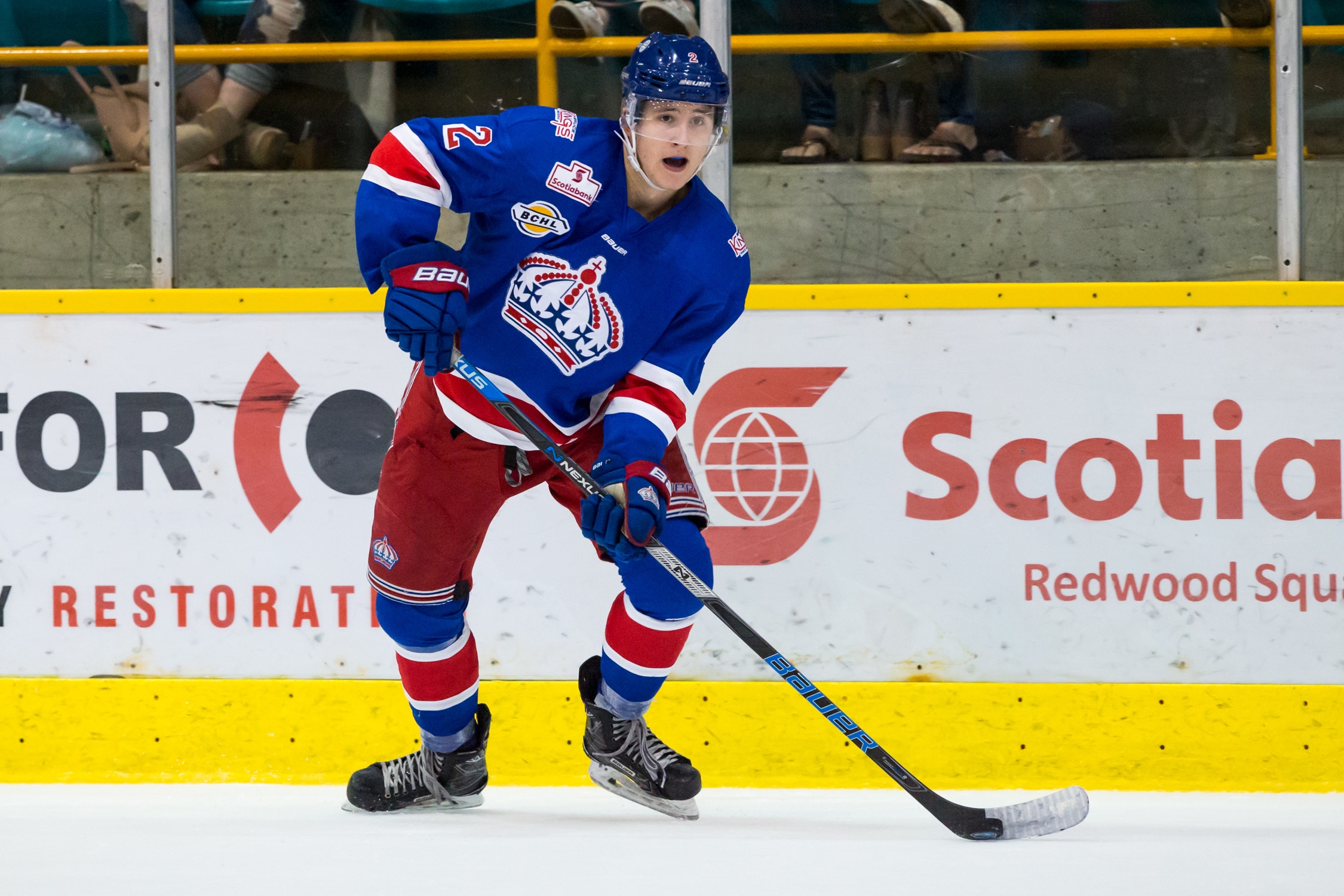 The offensive performances came with increased comfort and confidence in those situations, especially on the power play. Eight of his 17 playoff points came with the Spruce Kings up a man, including two of his goals.

Ahac also played for Team Canada at the World Junior A challenge earlier in the season and was Team West MVP at the CJHL Top Prospects game, which exposed him to top-level competition.

Now the fruits of his labour over two seasons in Prince George are on full display for all to see. That it helped lead a team that must deal with a set of unique challenges to its first league title in its 23 seasons in the BCHL made it even more special.

Prince George is at a disadvantage relative to the rest of the BCHL. The eight teams in the province’s Interior Division don’t have far to travel to play against each other. The four teams on Vancouver Island plus Powell River make up their own division

That leaves the Spruce Kings to play in the Mainland Division alongside Coquitlam, Langley, Surrey and Chilliwack, their closest divisional rival in terms of proximity to home, eight hours down Highway 1.

The organization does its best to ensure the team travels as comfortably as possible and the players buy into the idea that it is not a burden but rather an opportunity to bond and gain some independence.

“We have fun with it,” Ahac said. “We hear teams complain about it: ‘Oh, it’s eight hours. It’s boring,’ but most of the time we step on the bus we’re having fun. We’re mingling, playing cards, listening to music, getting to know each other. That’s obviously helped with our team success.”

Ahac and the Spruce Kings have a couple more long-distance trips left this season and two more trophies to claim.

Up next is the Doyle Cup, the annual best-of-seven series between the BCHL and AJHL champions that begins Friday against the Brooks Bandits.

And since Brooks is this year’s host of the Junior A national championship, both teams will take part in that tournament, too, which guarantees Ahac a few more games to keep up his torrid pace and continue to impress NHL scouts ahead of the draft.

As if his enhanced play wasn’t enough, the scouts he has already been in contact with have raved to his coach about their interactions with Ahac.

“The number one thing they (talk) about is how great he is in interviews,” Maglio said. “After each interview, they go, ‘Oh wow he’s a fantastic kid. He looks you in the eye, he speaks very well, he’s clear’ They can tell he’s focused as a player. (They tell me) how impressed they are in Layton with his character and as a kid.

“If he keeps building as he is, his draft stock is going to continue to rise.”

For more info on The Athletic see: https://theathletic.com/welcome/