For the first time since 1983, the Canucks drafted a BC-born kid at the NHL Entry Draft.

In case you were stuck under a rock and missed it, Vancouver made Abbotsford product Jake Virtanen the sixth overall pick on Friday night in Philadelphia.

Virtanen is an offensive force that scored 45 goals with the Calgary Hitmen this past season. He also adds a physical element to his game; he’s strong, he hits, and he isn’t afraid to drop the gloves. Off the ice, he is described as a good young man with his head on his shoulders who works extremely hard and is driven.

Brad Bowen has coached Virtanen since he was four-years-old when the now-speedster was just learning how to skate.

“We always joke because he has a nephew, J.J. Virtanen, that is the same age and they both started playing hockey at the same time,” said Bowen. “When they were four-years-old in our Learn to Skate program the two of them would get in trouble all the time and I would have to throw them off the ice. They were your typical four-year-olds that would horse around.”

Bowen, who coaches the Under-18 Prep team at the Yale Hockey Academy in Abbotsford, has worked with Virtanen the last 14 years. From the time he was goofing around at four years-old, all the way through atom, peewee, bantam, spring hockey with Bowen’s Vancouver Selects program, as well as at the Bo Knows Hockey skill development camps.

“You knew he was going to be good right from the start,” said Bowen, who also coached Virtanen at the Fraser Middle School Hockey Academy, as well as the Yale Hockey Academy. “He was an exceptional skater and was always working on his skating. He always had a stick in his hand whether it was on the ice or off the ice. He was an exceptional talent all the way through and was a kid that was full of energy right from the start. He loves the game, absolutely loves the game.” 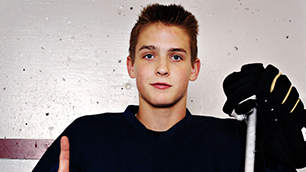 Virtanen was the star of his team all the way through minor hockey, which eventually led to him being selected first overall in the 2011 Bantam Draft.

“His skating skills were so strong,” said Bowen, who has also worked with the likes of Brent Seabrook and Shea Theodore, to name a few. “His ability to score goals and shoot the puck was always so much better than everyone else. He was a big kid, he matured early. Those three traits stood out all the time when he was coming up. Most importantly, his love of the game and work ethic made him even better.”

One thing that is evident watching Virtanen’s game is his grit, which was even on display when he was a 15-year-old call-up to the Hitmen during the 2011-12 WHL season. Bowen says that nastiness could be attributed to his older brother, Stefan, who went on to play Junior “A” hockey in the BCHL.

“He has an older brother that used to beat on him when they were young,” said Bowen. “He has an edge to him. He’s very confident in his ability, whether it’s with the puck or with his physicality. Just a confident kid that wouldn’t back down from anything or anyone. When you have an older brother that picks on you a little bit, I think it helps you out a little bit.” 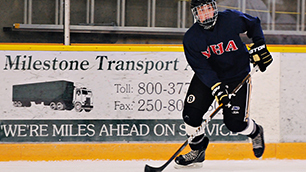 Bowen scouted for the New York Islanders from 2007-10, and currently scouts for the Portland Winterhawks. When asked to give his own scouting report on Virtanen, he described the 6-foot-1, 208-pounder as someone who can play wherever you need him to.

“He’s an exceptional skater. What Vancouver got is a player that if he continues to work and continues to develop, he will play in your Top 6, no doubt about it. He has the offensive abilities, offensive instincts, he can shoot the puck and he can score. But he is also a player that can play on the third line and be a real tough player to play against. If for whatever reason his scoring doesn’t come about at the NHL level, he still has a big part of the game where he can be effective. I just see him as a can’t-miss prospect that will play at the NHL level for sure.”

And off the ice, Virtanen has learned at an early age the importance of giving back and working with the kids.

“We just had our Vancouver Selects banquet on Sunday,” said Bowen. “He spoke at the banquet and must have signed about 200 autographs. He is very good with the kids, likes to give back. He will continue to work at my hockey school this summer. He still contributes to the Yale Hockey Academy and is really good with the younger kids. He is very good in the community.”