by Taylor Rocca
The jockeying for playoff positioning in the Western Hockey League continued Friday night with teams padding leads, closing gaps and leap-frogging one another within each conference.

Matteo Gennaro kept his hot hand burning to guide the Calgary Hitmen to an overtime win against the Vancouver Giants on CHL on Sportsnet. That outcome served to bounce the Hitmen into the Eastern Conference’s second wild-card position and ahead of the Saskatoon Blades, who fell to the Regina Pats. Gennaro was WHL player of the month, after potting 20 goals in January.

The Portland Winterhawks and Seattle Thunderbirds came out on top in their respective contests with the Everett Silvertips and Kamloops Blazers, serving to further tighten the standings in the U.S. Division.In Spokane, Jaret Anderson-Dolan logged a hat trick to lead the Chiefs past the Medicine Hat Tigers.

The Kelowna Rockets rolled into Prince George and scored a win over the first-place Cougars to keep things congested in the B.C. Division.On top of all that, Nolan Patrick and Tyler Coulter each had four-point outings as the Brandon Wheat Kings continued to make up ground in the East Division.

Here are the recaps: 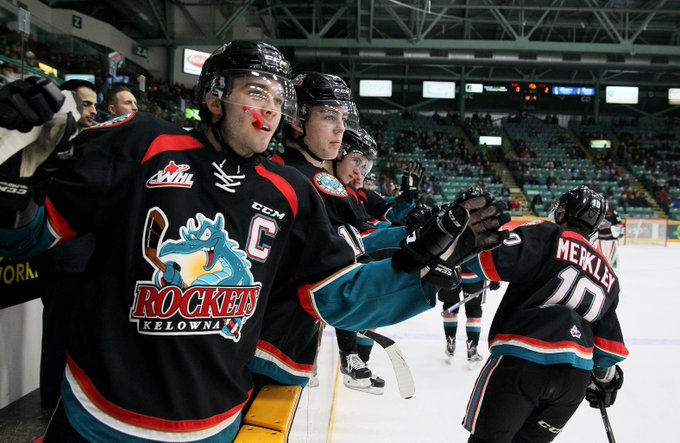 For Lind, it was his 24th of the season and second of the night after having opened the scoring with a short-handed effort 8:12 into the first period. Reid Gardiner followed up with his fourth of the season to give Kelowna a 2-0 advantage after 20 minutes of play.

Colby McAuley and Jesse Gabrielle scored in the second period to draw things even for Prince George.

Michael Herringer made 30 saves for his 22nd win of the season. 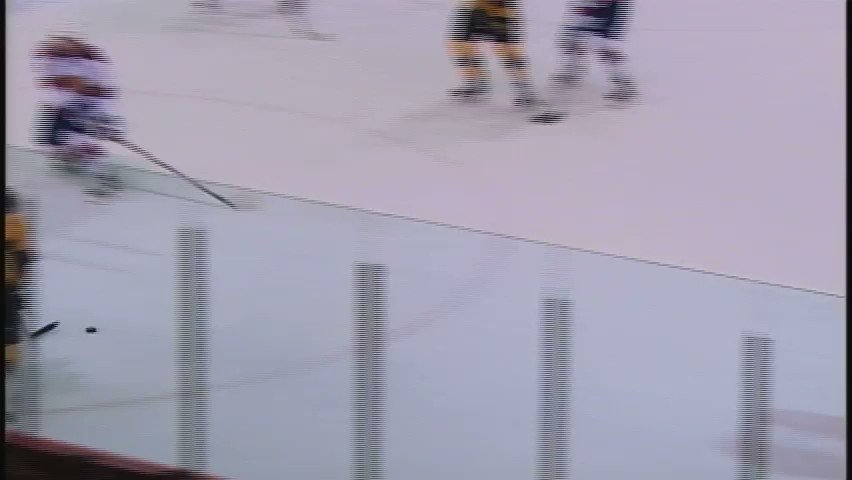 Nolan Patrick recorded four helpers and Tyler Coulter collected two goals and four points of his own as the Brandon Wheat Kings crowned the Edmonton Oil Kings by a 6-3 final Friday night.

Brandon carried a 5-2 advantage into the third period before Davis Koch scored his 14th of the season to pull Edmonton within a pair only 27 seconds into the final period. That’s as close as the visitors could manage as Coulter put his 22nd of the season and second of the evening into an empty net with 29 seconds remaining in regulation.

Travis Child made 22 saves for his 17th win of the season.With the victory, the Wheat Kings pulled within four points of the third place Swift Current Broncos as the East Division playoff race continues to heat up.

Kale Clague (2A), Stelio Mattheos (1G-1A), Patrick (4A) and Coulter (2G-2A) helped pace the offense for Brandon. Koch (1G-1A) and Graham Millar (2A) chipped in for the Oil Kings.Edmonton has now lost 13 consecutive games. 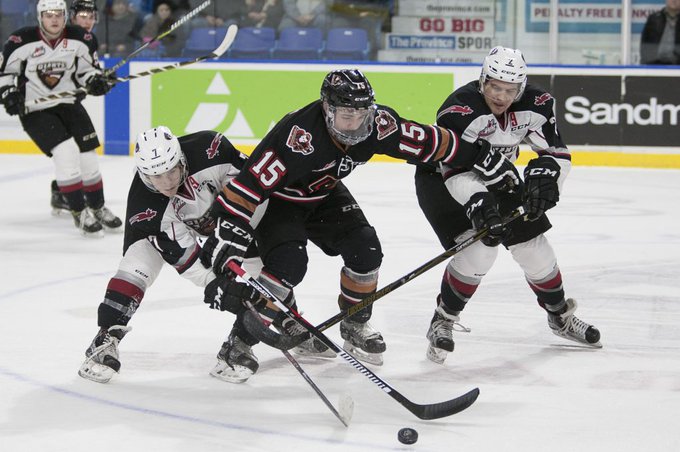 After posting 20 goals in 15 games to earn WHL Player of the Month honours for January, the Winnipeg Jets prospect kept up his torrid pace, tallying twice – including the overtime winner – to help the Calgary Hitmen scrape out a 4-3 win against the Vancouver Giants on Friday.

The Giants got off to a 2-0 lead courtesy first period tallies from Owen Hardy and Johnny Wesley that came a mere 24 seconds apart.

Gennaro got the Hitmen on the scoresheet 5:29 into the second period with his 32nd of the season.

Ty Ronning restored the Giants two-goal edge with his 20th of the season before Tristen Nielsen tallied his first of the campaign as the Hitmen trailed 3-2 after 40 minutes of play.

Former Giant Jakob Stukel burned his former club, registering his 17th goal of the season on a power play only 54 seconds into the third period, tying the game at 3-3.

Trevor Martin made 31 saves for his fifth win of the season.

The victory pushed the Hitmen into the second wild-card position in the Eastern Conference, as they leap-frogged the Saskatoon Blades to sit one point up in the final playoff slot. Calgary holds one game in hand on Saskatoon. 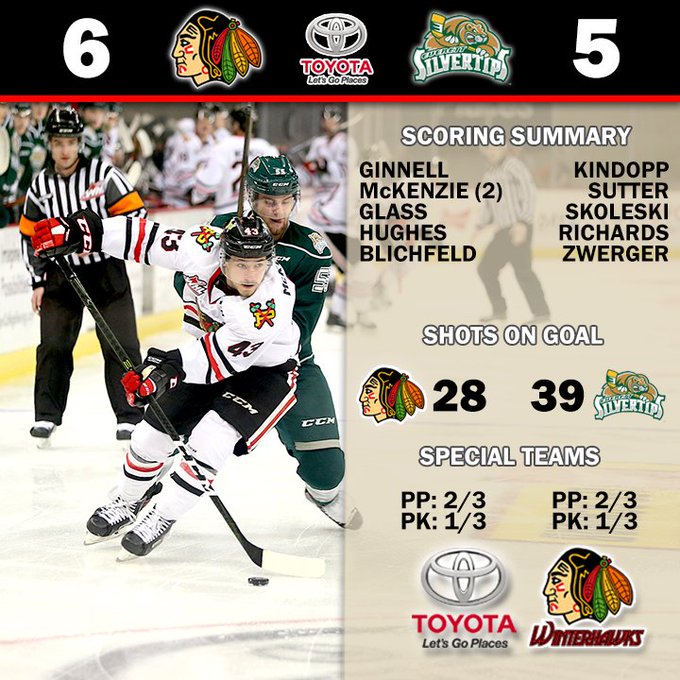 Make it six straight for the Portland Winterhawks. With a 6-5 triumph over the U.S. Division-leading Everett Silvertips on Friday night, the Winterhawks padded their Western Conference wild-card position to a healthy nine-point lead over the Spokane Chiefs and pulled within three points of the Victoria Royals for the first wild card in the conference.

Cody Glass (1G-3A) and Skyler McKenzie (2G-2A) had four-point nights to put wind under the Winterhawks’ wings and Cole Kehler made 34 saves to hit the 20-win plateau for the first time in his WHL career.

The two teams went back and forth through 40 minutes of play, but Joachim Blichfeld’s 18th of the season gave Portland a 6-4 advantage heading into the third period and that was all the Winterhawks needed to fend off the Silvertips.

Dominic Zwerger scored his 22nd of the season to get Everett within one late in regulation.

Caleb Jones (2A), Glass (1G-3A) and McKenzie (2G-2A) all hit the scoresheet multiple times.Aaron Irving registered four assists in defeat for Everett, while Eetu Tuulola (3A) and Kevin Davis (2A) also managed the multipoint feat. 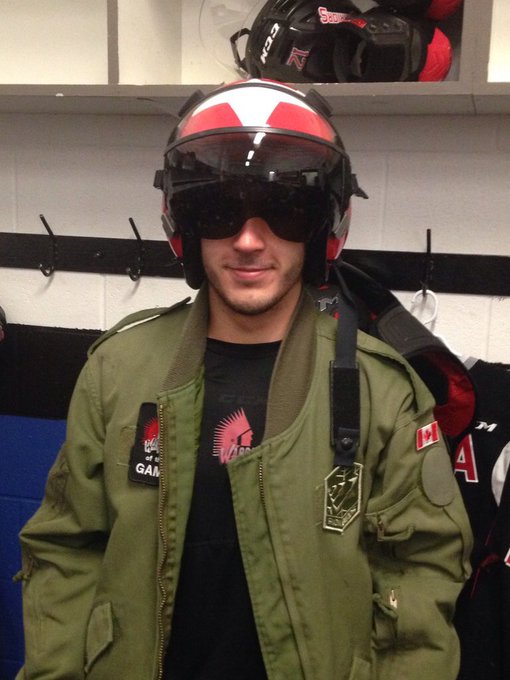 Jayden Halbgewachs tallied four points, including two goals in the opening 3:35 of play, leading the Moose Jaw Warriors to a 6-2 triumph over the Kootenay ICE on Friday.

Halbgewachs opened the scoring with his 39th of the campaign 30 seconds into the festivities, which Brett Howden followed up on 11 seconds later, notching his 27th of the year to give Moose Jaw a quick-strike 2-0 lead.

Only 3:05 after opening the scoring, the ‘Magic Man’ Halbgewachs was back at it, becoming the first WHL player to hit the 40-goal plateau this season and extending his team’s lead to 3-0 before the game was even five-minutes old.

Tristin Langan notched his fifth goal of the season 4:01 into the second period to all but secure two points for the Warriors.

Howden added a second goal and Luza Burzan struck for his 12th of the year to round out the Warriors scoring efforts. Max Patterson and Kaedan Taphorn replied for the ICE.Brody Willms made 20 saves for his 11th win of the season.

Spacek’s 23rd of the season came on a power play with 57 seconds to go in the second period, eventually standing up as the game-winning effort. Polei and Lane Zablocki deposited two empty-net goals in the dying moments to secure the victory for Red Deer.

Bobyk (3A), Polei (2G), Brandon Hagel (2A), Spacek (2G) and Adam Musil (2A) all made their impact known on the scoresheet for the Rebels, while Riley Lamb turned away 32 shots for his 12th win of the season. 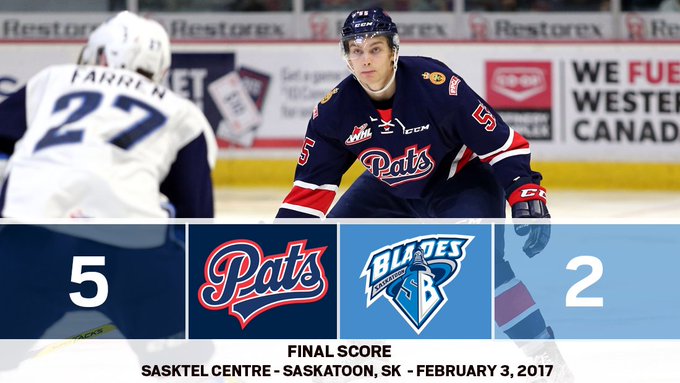 With a 5-2 triumph over the Saskatoon Blades on Friday night, the Regina Pats posted their seventh consecutive victory, maintaining a firm foothold atop the East Division.

Austin Wagner scored 23rd and 24th goals of the season, while defenceman Dawson Davidson tallied two points to lead the Pats over the Blades.

Nick Henry and Connor Hobbs also found the back of the net for Regina. Bryton Sayers and Braylon Shmyr replied for Saskatoon.

Tyler Brown made 18 saves for his 23rd win of the season.

Jaret Anderson-Dolan scored three times on the power play and added an assist to spark the Spokane Chiefs to a 5-3 win over the Medicine Hat Tigers on Friday.

The Tigers roared to a 2-0 lead as James Hamblin and Matt Bradley scored consecutively in the final five minutes of the first period before Hayden Ostir got the Chiefs on the board 2:25 into the second period.

At 8:57 of the second, Anderson-Dolan put his 25th goal of the season past Michael Bullion to tie the game. Then at the 12:34 mark, Anderson-Dolan sent his 26th of the year to the back of the net, giving Spokane its first lead of the night.

Tyler Preziuso scored 2:14 into the third period, pulled Medicine Hat even, but with 8:08 to go in regulation, it was Anderson-Dolan taking advantage of another power-play opportunity to give the Chiefs a 4-3 lead.

Keanu Yamamoto’s 19th of the season served as insurance for the Chiefs.
Dawson Weatherill made 31 saves for his ninth win of the year. 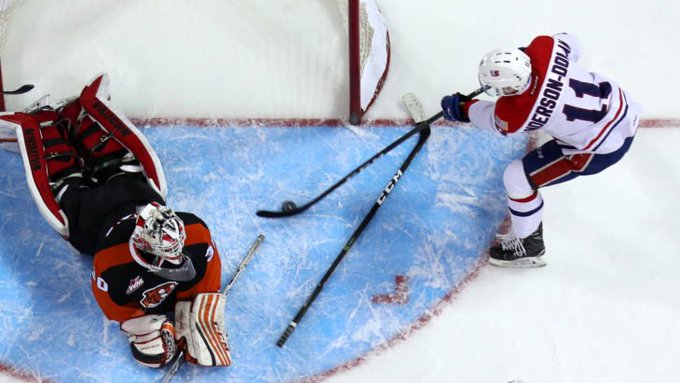 Kamloops Blazers (2) at Seattle Thunderbirds (3) – SO 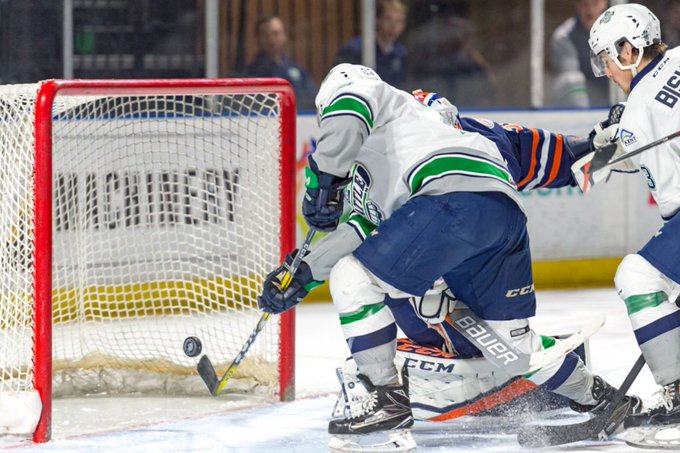 All of the other scoring occurred during a busy second period.

Nic Holowko and Luke Ormsby each registered their fifth goals of the season in a span of 43 seconds. Then it was Deven Sideroff hitting the 30-goal plateau to put Kamloops back in front 2-1 before Kamloops product Ryan Gropp notched his 14th of the season to tie the game 2-2 on behalf of the Thunderbirds.

Rylan Toth made 35 saves, plus another seven in the shootout, to earn his 26th win of the season.

The victory put the Thunderbirds only four points back of the Everett Silvertips for first place in the U.S. Division. Seattle holds one game in hand.